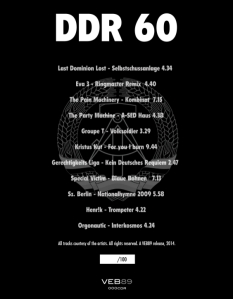 In 2009 Sz. Berlin commissioned a series of artists to reflect on the 60th anniversary of the DDR. In accordance with a 5 year plan, this CDR compilation will now be released in time for the 65th anniversary of the DDR this October. Issued by the new label VEB89, it features styles ranging from EBM to martial/ritual industrial, post-New Beat, cosmic pop and more. Sz. Berlin’s contribution is Nationalhymne 2009, a re-imagining of the DDR anthem. It also features an Eva 3 remix of Sz. Berlin’s first track Ringmaster. Stand by for further details. …

Sz.Berlin (Schmerzzentrum Berlin) is a London-based cultural intervention force formed in 2007. It draws inspiration from German and European historical, cultural & ideological sources. It takes particular inspiration from the hidden history of electronic music research in the DDR, as well as from East German design culture and the Warsaw Pact. More recently, it has engaged with Irish history and continues to develop its sound and aesthetic. Sz. Berlin has performed at several London nights including Ill FM At The Others, Klub V.E.B. and Noise=Noise. It has also performed on location in Bosnia and Ireland. In May 2011 the group participated in the Konjic Biennale with installations and a performance in the former Yugoslav command bunker. See the Biennale website for further information on the bunker and the installations page for more details of the Sz. Berlin works featured. Following a pause Sz. Berlin re-emerged in 2013 with a London live action and a new video. Sz. Berlin also commissioned a thematic compilation based on the history of East Germany and this was issued in October 2014 by the label VEB89. Studio work continued in 2015, resulting in the release of a new digital track. Following a period of intensive historical research and a/v production and editing Sz. Berlin re-emerged in summer 2016 to participate in 2nd NSK State Folk Art Biennale in Ireland. Future plans include a London live performance and the release of both new and archive recordings. For press, performance or installation enquiries please contact sz.berlin[at]ymail.com
View all posts by Sz.Berlin →
This entry was posted in Releases, Remixes, Sounds and tagged DDR60, EBM, electronic, VEB89. Bookmark the permalink.